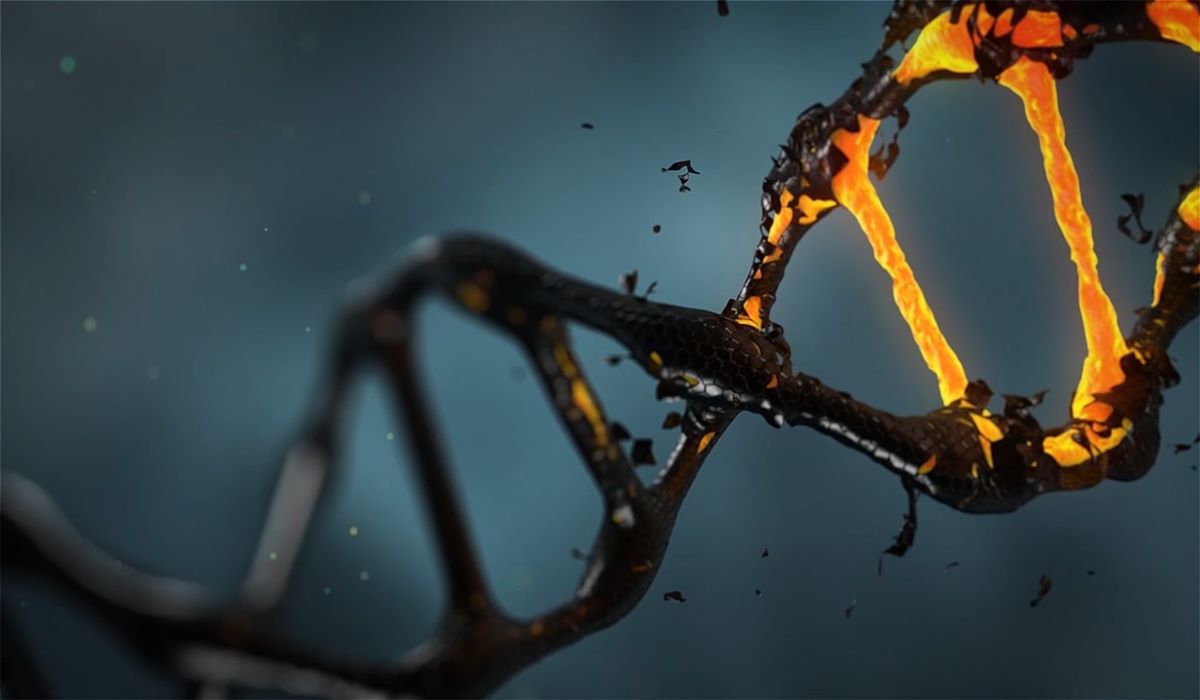 Inconsistent payor policies and a number of other factors are limiting uptake of genomic testing. There are solutions.

Diagnostics and the power of its evolving technologies are capturing unprecedented public attention these days, due to its dramatic role in controlling the coronavirus pandemic, but the heightened interest isn’t translating into a massive win for other novel diagnostic tests. That’s certainly true for genomic testing, which can be as impactful on patient outcomes in select populations as COVID-19 testing is for the masses. Yes, genomic tests are increasingly ingrained in clinical care, and reimbursement for them is more favorable than it has been in the past. But inconsistent payor coverage policies limit adoption, and many other hurdles remain.

A study published this summer by four collaborators --the Personalized Medicine Coalition (PMC), a national lobbying group, the Blue Cross Blue Shield Association (BCBSA), Illumina, and Concert Genetics—examines the relationship between payor policies and uptake of genomic testing. While it covers well-known ground at a high level—ie the challenges of reimbursement, the statistics it offers drive the point home and highlight nuances that clarify the problems.

Overall, the key takeaway is that the status of medically appropriate genomic test utilization in different parts of the country often does not reflect payor policies, which are inconsistent and confusing.

“The report suggests that there is a lot of variation and that we are at an early stage in the evolution of personalized medicine in the clinic, which has implications for fairness in care of patients. In a mature, functioning market, you would expect variation to be minimal and correlated to things like individual patient needs, not geography,” says Rob Metcalf, CEO of Concert Genetics, one of the co-authors.

The study defines genomic testing as sequence-based tests that analyze multiple genes and data at the level of the genome and exome. It examines state-by-state uptake of three of the most common types of genomic testing: noninvasive pre-natal testing (NIPT), whole exome sequencing (WES) for patients with rare and unidentified inherited diseases, and comprehensive genomic profiling (CGP) of tumors in late-stage oncology patients.

Findings were based on information collected from diverse resources, including a proprietary database of 40 million commercially insured lives, extrapolated to represent a national scale and curated by Concert Genetics. The data, which tracks utilization from January 1, 2017 to December 31, 2019 and coverage policies from January 1, 2018 to December 31, 2019, contains information from the US Census, test catalogues, payor claims and plan membership data, and standardized test/policy coverage policies in order to draw high-level conclusions about challenges of optimizing adoption of new genomic tests in the US.

The results imply that multiple factors are working against broad access to and adoption of genomic tests (see box). While an obvious cause of the lag in uptake could be inadequate healthcare insurance, that

is not the only driver, as demonstrated by the lack of alignment between utilization trends and favorable coverage policies. In some cases, such as Texas, Illinois, and New Jersey, high coverage policy scores and higher utilization levels were in sync in all clinical areas. But in other states, such as Washington for NIPT and CGP and Colorado for WES, utilization rates were low despite favorable policy trends. Others, like New York and Connecticut for NIPT, had low coverage scores but high utilization.

Specific examples of barriers include exclusion of genomic test results from electronic medical records and CPT coding categories that are insufficient for the exponential growth in volume of new genomic tests. “It is a challenge to keep up with the new information, and a difficult situation for different groups,” says Metcalf.

Policies among payors vary for many reasons, notably the definition of clinical utility is ambiguous, and the diverse needs of employers and members require different incentives when purchasing insurance, explains Gillian Hooker, PhD, VP, clinical development at Concert Genetics. Also, complexity is a big factor in coverage trends because the rapid expansion and evolution of the market means insurers have limited resources to evaluate the quality of each test she adds. 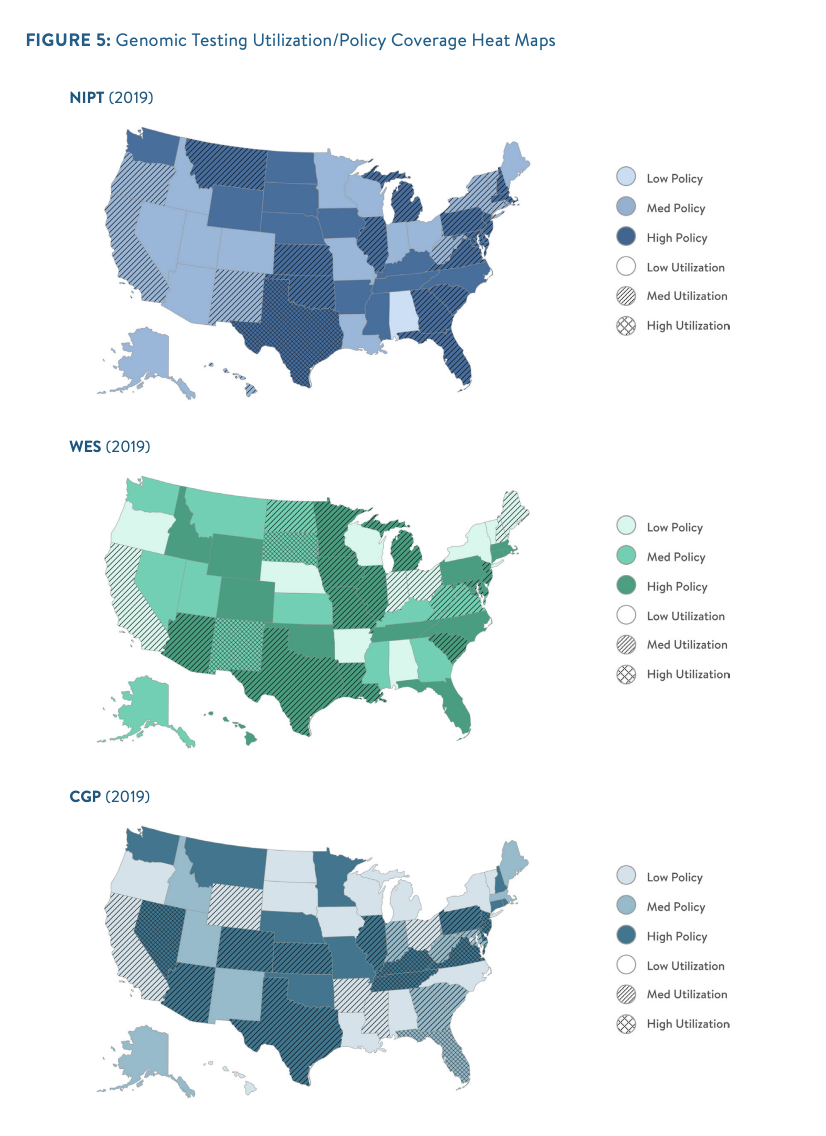 Of the three broad categories of testing, NIPT coverage is most consistent within and across states. All three categories of genomic tests studied in the report were likely underutilized, based on an extrapolation of tests per million members in the context of general population disease prevalence (see figure).

Solutions are transparency around these variations, as well as standardized coding that is linked directly to the services provided, and, eventually, a taxonomy for genomic testing that can be widely accepted, says Hooker. Right now, coding for similar tests varies considerably because there are different policies for the same test and people may meet some but not all of the criteria for particular policies. There should be one way to code a test and apply policies, she argues.

To improve uptake, clinical specialists and manufacturers should look for ways to generate solid evidence of clinical and economic value of the tests and reach out to stakeholders with education opportunities and increase access to testing. Addressing socioeconomic determinants of health, as well as increasing awareness of genomics, would help.

Another is improving computational tools that can simplify transactions, a service that Concert Genetics sees as an opportunity. The company is converting workflow and processes involved in ordering and analyzing genomic tests into computational tools that can improve transparency and simplify a vastly confusing landscape for laboratories and payors.

In this video interview, we speak with Freenome CEO Gabe Otte on his company's expectations for 2021, how its test strategy is differentiated from competitors, and what the developments of 2020 mean for the field.