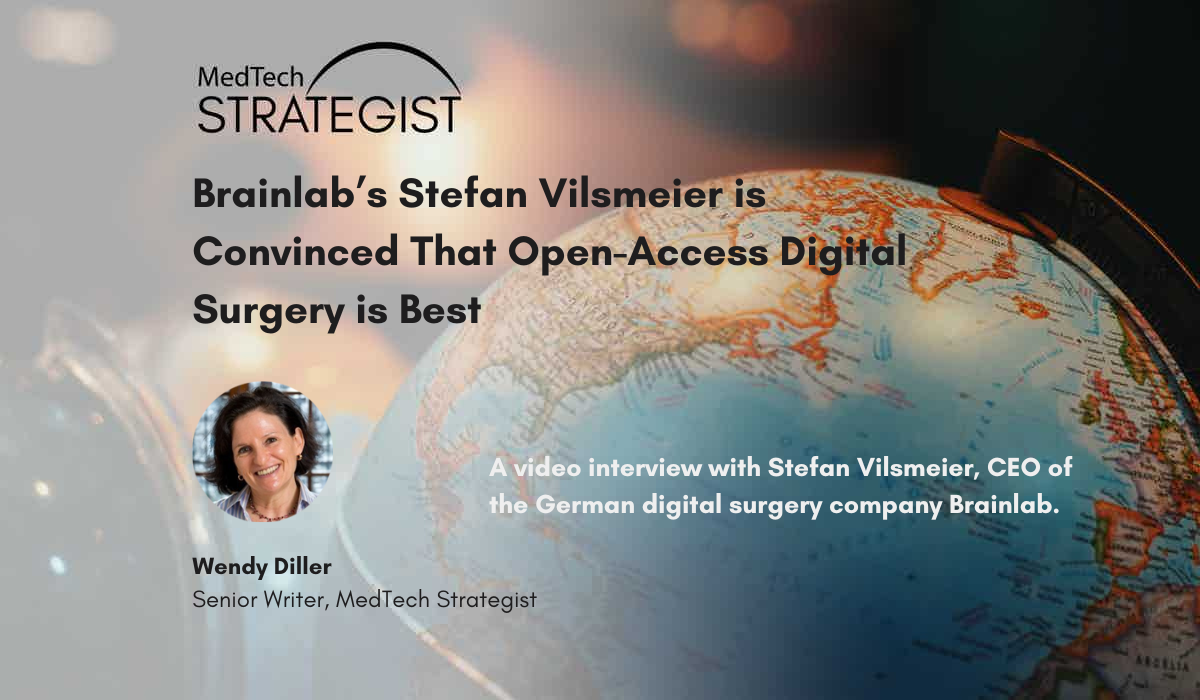 As medtech expands further into digital surgery, one of the field’s pioneers, the CEO of the German digital surgery company Brainlab, Stefan Vilsmeier, explains in this video interview his vision of the future of the digital operating room and why the company he founded more than 30 years ago—while he was still a university student—has become a leading advocate for open-access platforms in the OR, versus the closed systems ubiquitously offered by competitors.

Brainlab, the Munich, GE-based medical technology company that is pioneering digital surgery on a global scale, likes to compare its work in the operating room to that of companies developing global positioning systems (GPS) for cars—that is, it is building out an ambitious, highly refined data-driven software platform that continuously tracks surgical instrumentation in relationship to the actual patient anatomy, and displays that relationship, in real time, on a software screen during surgery.

The work started decades ago, with anatomical mapping of the brain for more precise neurosurgery, which Brainlab has since expanded to other body parts. Over the years, it has integrated this mapping platform into its growing portfolio of surgical instruments, imaging equipment and software for neurosurgery, spine, orthopedics, and, more recently, craniomaxillofacial, and ENT service lines.

In doing so, the company adamantly maintains a strategy of sharing its technology via open interfaces and now has more than 150 collaborators, with which it has interoperability agreements and interfaces. Two years ago, Brainlab launched an independent company, Snke OS, to sell its open-access enterprise platform, also called Snke OS, which enables other medical technology companies to integrate their digital solutions for imaging, navigation, robotics, cloud computing, and AI, as well as mixed reality with Brainlab’s operating system. Snke OS started with roughly 80 employees and has now grown to more than 200.

The technology it sells is essentially a software platform that, unlike most traditional medical devices, is sold under a subscription fee based commercial model. Through Snke OS, companies eager to develop new software applications for healthcare will be able to access an existing framework that provides the data and operational infrastructure to support the innovations, says Vilsmeier.

More recently, the company introduced BUZZ Digital O.R., which is a data integration hub for the O.R., that routes, displays, streams, and records medical images, software, and videos, much like an Apple TV does for entertainment applications. One of its key goals is to help newcomers to the O.R. “get a foot in the door of the operating room,” where space is at a premium, through its ability to integrate all visualization software on a Brainlab server, Vilsmeier states. Brainlab has also been aggressively acquiring small companies that add to its technological capabilities and is now looking at bigger deals with companies that have a more established market presence and well-defined distribution channels. To this end, the company has been an aggressive dealmaker in recent years.

Subscribers can view our conversation with Stefan Vilsmeier below.