Medical Device Reform in Europe: Where Do We Go from Here? 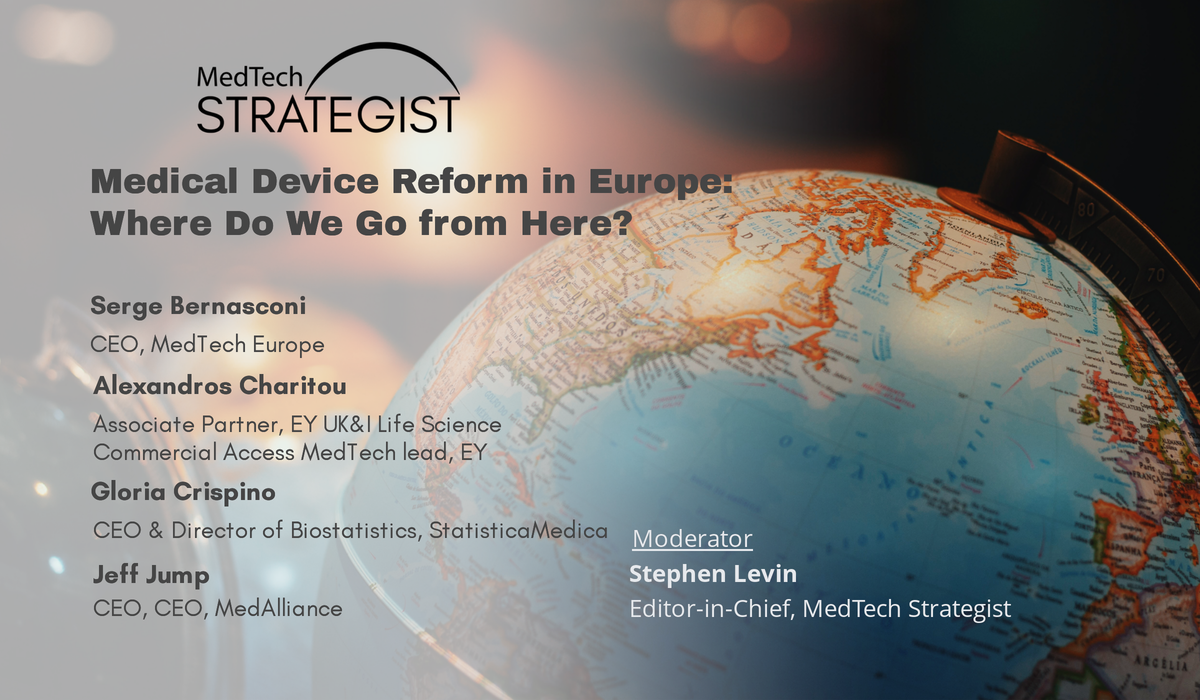 The new Medical Device Regulation in Europe has turned from an eventuality to a reality. This video panel of medical device experts advises on how companies can most effectively work through the transition to the new system and how long it will take to return the European medtech regulatory market to some degree of normalcy.

It seems as though the device industry has been talking forever about the impending regulatory change in Europe from the Medical Device Directive (MDD) to the new Medical Device Regulation (MDR), a process that was extended by an additional year due to the pandemic. Well, the long, if not eagerly-awaited shift has now become official with the MDR taking effect as of May 26, 2021. After all the anticipation, what do the new rules actually mean for product companies, investors, and other key constituencies in the medtech industry and how can they best manage during this transition to the MDR?

To answer those and other key questions and get a clearer understanding of what this new regulatory environment is likely to look like, as part of our recent Invesment Summit Virtual Dublin, we convened a panel of experts who have been following this issue for the past few years to share their perspectives. The panel features Serge Bernasconi, CEO of MedTech Europe, the European device industry trade association; Alexandros Charitou, Associate Partner, EY, where he is the Life Science Commercial Access MedTech leader for the UK and Ireland; Gloria Crispino, CEO & Director of Biostatistics for StatisticaMedica Ltd. in Dublin; and Jeff Jump, CEO of the Swiss-based drug-coated balloon company, MedAlliance.

Not surprisingly, the panel agreed that the biggest challenge the industry faces under MDR is the uncertainty that exists under the new regimen. Jeff Jump points out that both product companies and investors look for markets that provide operational predictability, which currently exists to a much greater degree in the US than in Europe—a reversal of the regulatory climate that drew Jump to move his operations to the EU 40 years ago. This shift, driven as much by FDA advances as the adoption of MDR, resulted in a consensus view among the panelists that Europe will no longer be the geography of choice for innovative medical technology with companies looking first to the US and Asia, at least for the next few years. Panelists also identified concerns about the lack of clarity in basic terminology under MDR, such as what constitutes an implant, as well as the lack of programs such as the FDA’s Breakthrough Device category, as further impediments to innovative technology becoming available early in Europe.

Further impeding medtech progress is the lack of an adequate number of notified bodies (NBs), which all agreed was likely to cause a major regulatory bottleneck. Serge Bernasconi estimates that the current number of NBs (around 20) is only half the number needed for the system to operate efficiently, and his guess is that it will probably take another two years to get the requisite level of notified bodies operational.

The silver lining, if there is one, is that as Gloria Crispino explains, the MDR helps enable companies to utilize a single set of clinical trials for simultaneous US and EU regulatory approvals. The key, she notes, is for product companies to be selective in choosing their safety, performance, and/or marketing claims to be able to provide the necessary supporting data.

The other positive message is that the discomfiture resulting from the MDR is likely to be temporary. However, whether the disruption resulting from the immediate uncertainty lasts three years, five years or longer is anyone’s guess.

Subscribers can view the panel video below.

Serge Bernasconi on Waiting One More Year for MDR

MDR: It’s Not the End of the World for Medtech Companies