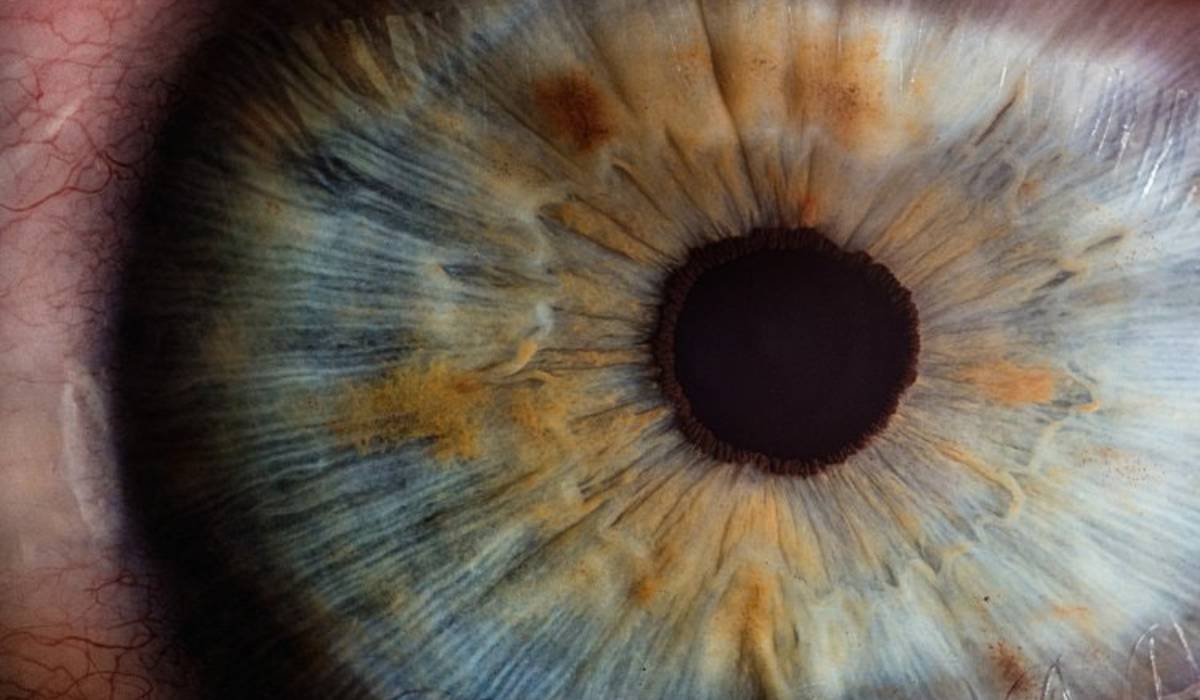 In this installment of IMH, we take a look at the pioneering early work in intraocular lenses that laid the foundation for the remarkable devices on the market and under development today that are preserving and even restoring vision. We also discuss three important trends to watch in the ophthalmic implant space, according to Andrew Iwach, MD, Executive Director of the Glaucoma Center of San Francisco, and clinical spokesperson for the American Academy of Ophthalmology.

In 1949, English ophthalmologist Sir Harold Ridley achieved one of the greatest milestones in medical history, and forever changed the way we see the world. 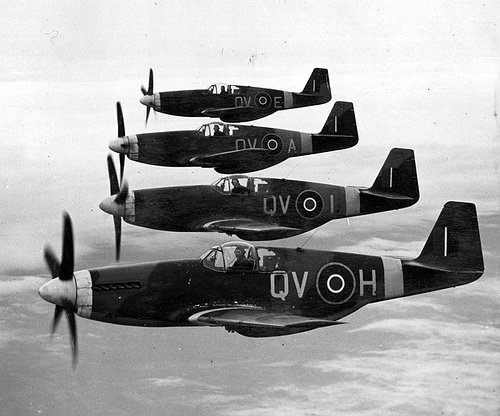 It all started during the dark days of World War II. As Ridley performed surgery on British Royal Air Force pilots who had suffered eye injuries, he observed that when splinters of acrylic plastic from aircraft cockpit canopies became lodged in their eyes, this did not trigger inflammatory rejection as did glass splinters. This led him to propose the use of artificial lenses made of acrylic Perspex to treat cataracts. (Keep in mind, at that time the use of materials that are foreign to the body to fix a medical problem was unheard of.)

Despite fierce professional opposition, Ridley had a lens manufactured with materials provided by British chemical company Imperial Chemical Industries at Rayner Intraocular Lenses Ltd. in Brighton, East Sussex. On November 29, 1949, at St. Thomas' Hospital in London, Ridley performed the first implant of a manufactured intraocular lens (IOL) in a 45-year-old woman, after removing her cataract. In 1950, following refinements to materials and technique, he performed a permanent artificial lens implantation.

By the early 1970s, Ridley’s pioneering technique had been established as a routine treatment for the treatment of cataracts, and today it is one of the most common and effective of all surgical procedures worldwide. In the 1990s, Ridley himself had the lenses in both his eyes replaced, thus benefiting from his own invention.

In the decades since, physicians around the world have continued to evolve ophthalmic technology to ultimately improve lives through better vision. Today, advancements run the gamut from minimally invasive glaucoma surgery (MIGS) devices to implantable microchip systems for the treatment of retinitis pigmentosa, to devices that employ artificial intelligence to detect adult diabetic retinopathy. And, as noted in the discussion below, the future is bright for ophthalmologists and patients in detecting, monitoring, and treating diseased eyes. 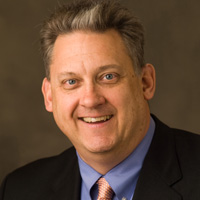 “One of the key challenges we have in asking patients to take eye medications, primarily eye drops that have to be taken once a day if not more, is compliance,” Iwach tells the Community Blog. “Having an implantable mechanism whereby drugs can be delivered in an extended-release fashion will help provide more consistent dosing and better outcomes,” he continues. This is particularly important for the progressive disease glaucoma, which is the second leading cause of blindness in the world, according to the World Health Organization. More than 60 million people worldwide are estimated to have the disease.

There are a variety of implantable devices in the pipeline to deliver glaucoma drugs more conveniently and safely over a longer period of time (see the Box below, and also extensive coverage in our publication MedTech Strategist). As an added potential benefit, these technologies may eliminate the side effects associated with high-dose once- or twice-daily eye drops, says Iwach. These devices may also open up the possibility of using new glaucoma drugs with a short half-life and higher loading dose, that aren’t practical for eye drop delivery by patients, he continues. The end goal of these drug delivery technologies, of course, is better preservation of vision for many people with glaucoma. 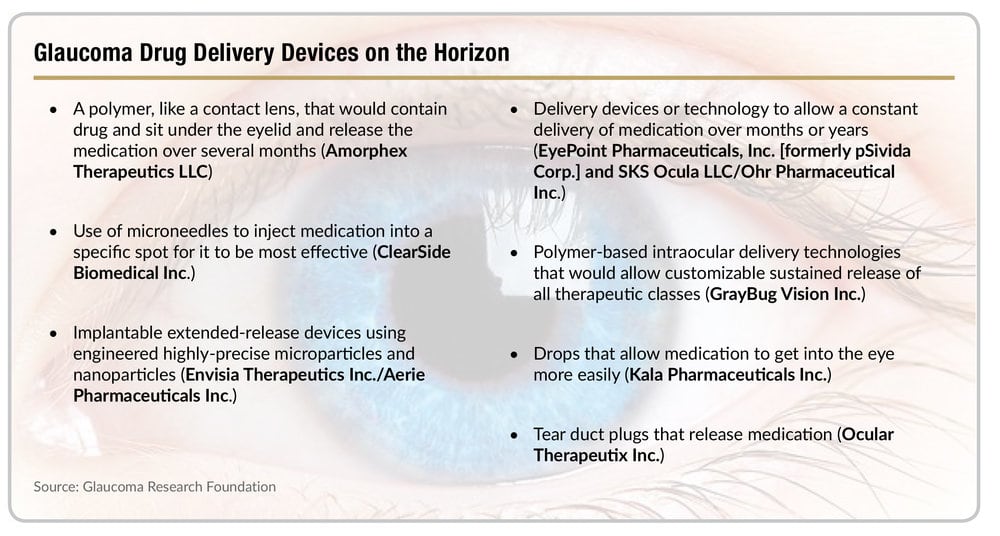 Another exciting trend that has emerged in the ophthalmic implant space is monitoring diseased eyes on a continuous basis, rather than only during periodic ophthalmologist exams, says Iwach. As an example, in glaucoma, intraocular pressure (IOP) is the only treatable risk factor contributing to the disease, and most management and treatment of the disease is based on this single measurement. Patients receive regular exams in which IOP is measured, but this only gives a snapshot of the condition of the eye at that particular time. In reality, studies show that eye pressure varies throughout the day. It may be higher at night when the patient is asleep, and this data is not being picked up with traditional monitoring systems. (Imagine if we measured blood glucose in diabetes patients that infrequently!)

Several device companies are developing technologies that are placed on the eye surface or implanted in the eye to measure IOP continuously, in real-time. At least one is on the market in the US. In 2016, the FDA approved the Triggerfish from Sensimed AG, a one-time-use contact lens that may help identify the best time of day to measure a glaucoma patient’s IOP. The Triggerfish, CE-marked in 2010, has a sensor embedded in a soft silicone contact lens that detects tiny changes or fluctuations in an eye’s volume.

The device is worn for a maximum of 24 hours, transmitting data wirelessly from the sensor to an adhesive antenna worn around the eye. A portable data recorder worn by the patient receives information from the antenna and can transfer the data via Bluetooth to the clinician’s computer, which shows the range of time during the day the pressure of the eye may be increasing (it does not actually measure IOP).

Other at-home IOP monitoring devices that are being developed for implantation during cataract surgery include the Eyemate sensor from Implandata Ophthalmic Products, which received the CE mark in 2017 for use in primary open angle glaucoma patients, and the iSense System from AcuMEMS Inc.

“Having this real-time information will hopefully help us better understand the dynamics of glaucoma and treat patients in a more effective and efficient way,” Iwach tells the Community Blog.

As an alternative to traditional incisional ophthalmic surgery to reduce IOP and preserve vision, which can have high complication rates, a number of new MIGS techniques have been developed. Most MIGS require an implantable device, a variety of which have emerged and gained in popularity over the past few years. The first to be FDA-approved, in 2012, is the widely used iStent from Glaukos Corp. A second-generation device, the iStent inject Trabecular Micro-Bypass System, received premarket approval from the FDA this June for the reduction of IOP in adult mild-to-moderate primary open-angle glaucoma patients undergoing concomitant cataract surgery. In August, Ivantis Inc. received FDA approval for its Hydrus microstent, designed to treat patients with mild to moderate primary open-angle glaucoma, also in conjunction with cataract surgery. Another device, the XEN Gel Stent from Allergan plc, was FDA-approved in 2016 for patients with refractory glaucoma.

The still-emerging MIGS market has had its hiccups as well. In August, the CyPass microstent from Alcon Laboratories was voluntarily removed from the market after researchers detected a significant rise in endothelial cell loss among patients who are five years out from cataract surgery in which they received the CyPass, compared with patients who underwent cataract surgery without the microstent. The company is working with the FDA to explore labeling changes that would support the reintroduction of the CyPass microstent in the future, according to statements made by Alcon.

In addition to these devices, there are a host of other implants in development, including a novel device that is foldable—a concept that is commonly used in intraocular lenses in order to make them easier to implant, says Iwach.

“There is a big need for these new types of devices, as we need a better solution for chronic glaucoma with fewer complications,” he tells the Community Blog. “And, it is encouraging to see a cross-pollination between different types of eye diseases and approaches,” he continues.

In the upcoming Part 2 of this post, we continue envisioning the future of ophthalmic devices with Dr. Iwach, and we highlight some especially innovative technologies that are working to address growing health problems that impact the vision of millions of patients worldwide.

The Community Blog also looks forward to covering important medical device news from the annual meeting of the American Academy of Ophthalmology (AAO), being held in Chicago, October 27-30, 2018.