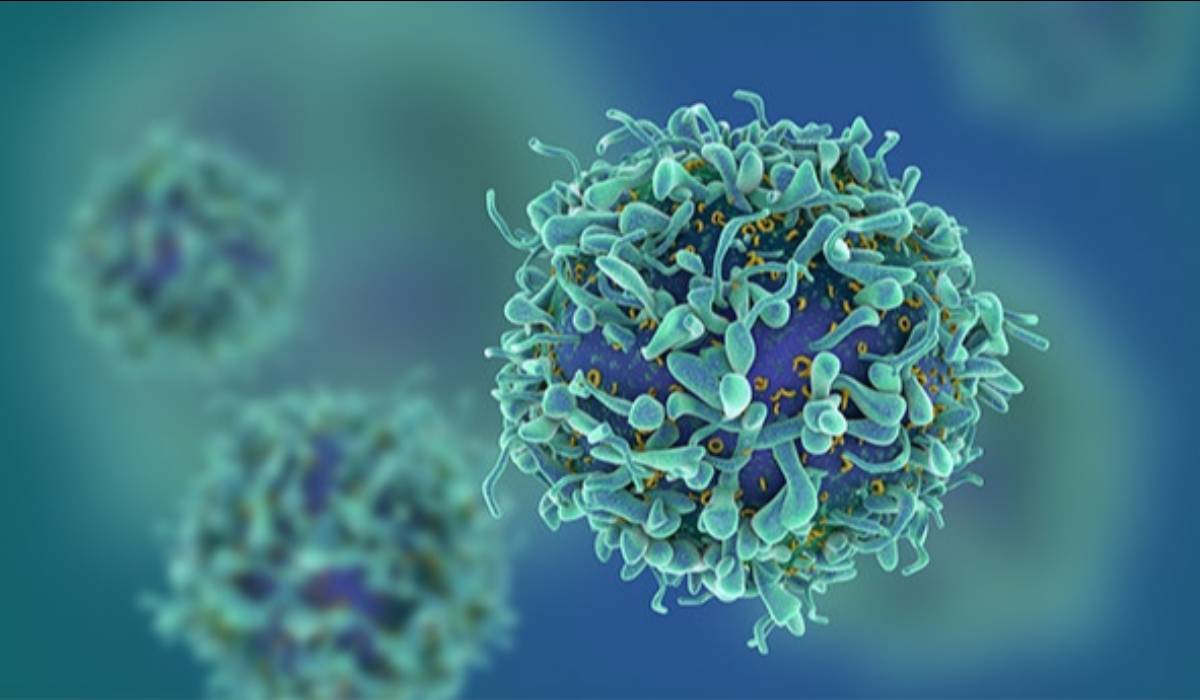 Fueled by the passion of pioneering physicists, physicians and medtech innovators looking for a way to fight cancer and make an impact on patient survival and quality of life, cutting-edge oncology devices under development today include an implant designed to infuse chemotherapies directly into aggressive pancreatic tumors, and an MRI-safe robotic system for breast biopsy.

In 1895, a medical breakthrough occurred that would not only lead to the first Nobel Prize in Physics in 1901, but to the first device technology after the surgical scalpel to treat cancer, one of the world’s leading causes of death to this day. At that time, a German mechanical engineer and physicist, Wilhelm Conrad Röntgen, produced and detected electromagnetic radiation in a wavelength range known as X-rays (with the “X” being the mathematical symbol for “unknown”), also called Röntgen rays, and also showed that radiation can penetrate solid objects of low

density. One day in his lab, while investigating the ability of various materials to stop the rays, Röntgen brought a small piece of lead into position while a discharge was occurring. Röntgen saw the first radiographic image, his own flickering ghostly skeleton on a barium platinocyanide screen. Nearly two weeks after his discovery, he took the very first X-ray picture, of his wife Anna Bertha's hand (see image here).

Excitement for this new technology spread quickly worldwide, and within months, X-ray systems were being devised to view the inside of the body to diagnose conditions such as pneumonia, pleurisy, and tuberculosis. Then, in 1896, an American medical student, Emil Grubbe, found that X-rays and other forms of radiation could kill tumors. That year, he assembled the first X-ray machine in Chicago and used it to treat a woman with recurrent carcinoma of the breast. In the same year, French physicist Antoine Henri Becquerel began studying the phenomenon of radioactivity and researching natural sources of radiation. In 1898, Maria Sklodowska-Curie and her husband Pierre Curie discovered radium as a source of radiation. Only three years later, Becquerel and the Curie’s reported on the physiologic effects of radium rays, and in recognition of this achievement the three shared the Nobel Prize in Physics in 1903.

The methods and the technologies that deliver radiation therapy (and the safety of this treatment for physicians and patients) have steadily improved over the last century. Radiotherapy is now one of the leading technologies used to treat many types of cancer, and medical devices in general are now indispensable for effective screening, diagnosis, treatment, palliation, and rehabilitation in cancer.

In this week’s edition of “In MedTech History,” we would like to recognize these groundbreaking historical achievements, and also highlight two cutting-edge, development-stage technologies looking to make an impact on cancer survival. The first is an implant designed to infuse chemotherapies directly into poorly vascularized pancreatic tumors, and the second is an MRI-safe robotic system for breast biopsy.

Targeting Pancreatic Tumors
Pancreatic cancer, with no reliable tests for early detection, is an aggressive disease with the lowest five-year survival rate of any major cancer, at only 8%. It is the third leading cause of cancer-related death in the US. The cancer is especially difficult to treat because of its challenging location next to critical organs and vessels, and also because of the dense stromal tissue that surrounds pancreatic tumors, which makes systemic chemotherapy treatment a challenge.  Raleigh, North Carolina-based Advanced Chemotherapy Technologies (ACT) Inc., founded in 2014 out of the University of North Carolina (UNC), hopes to change this grim outlook with a novel implantable device for infusing chemotherapy directly into poorly-vascularized pancreatic tumors. 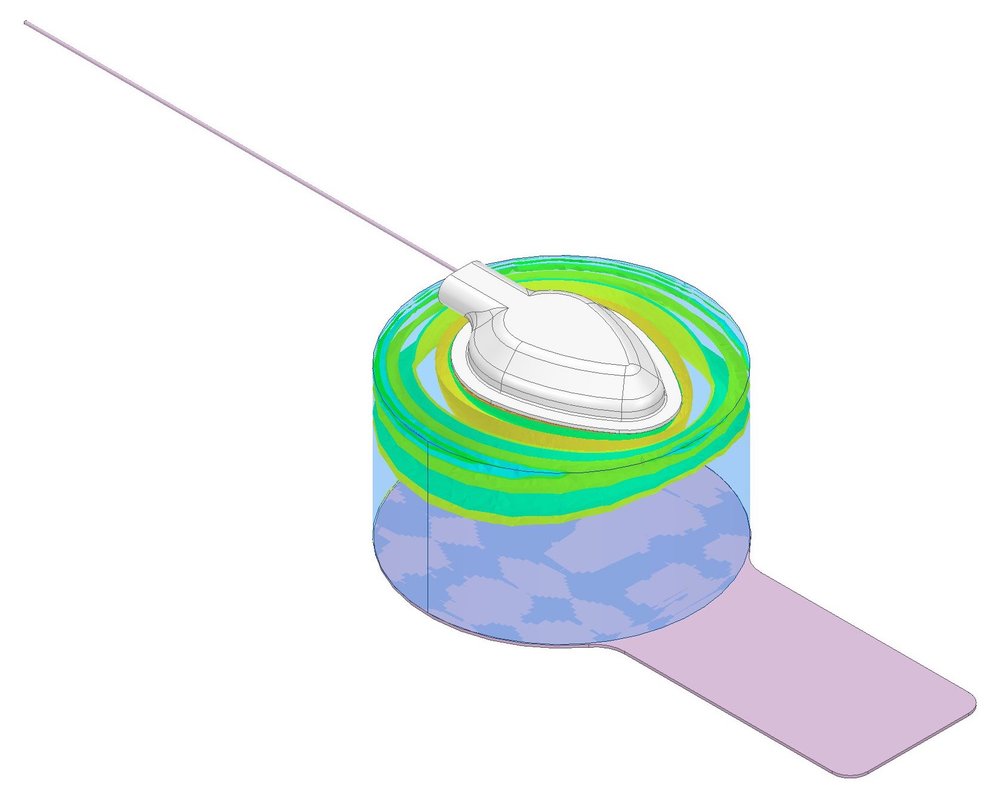 ACT’s drug delivery implant, about the size of a large coin, is being designed for implantation in the pancreas, with electrical leads through a port in the abdomen, connecting the device to an external infusion pump and an electrical power supply (see image). The device would drive chemotherapy into the tumor using electrical currents that pass through the drug solution (iontophoresis). More precise drug delivery could shrink tumors enough for surgeons to remove them - the best treatment option - and also allow for targeted chemotherapy directly to the pancreas, significantly reducing toxic systemic side effects, says Tony Voiers, the company’s CEO. While not always curative, these improvements could extend those patients’ life expectancy. So far the device has been tested in a human mouse tumor xenograft model demonstrating an unprecedented 49% reduction in the growth of tumors, and a scaled-up device has been tested on canines. ACT plans to begin first-in-human testing of the device next year at UNC.

“That’s what got me into the company,” Voiers said in a recent interview. “That was a very impressive reduction from my standpoint. That’s what we’re working to replicate in humans.” Voiers, who joined the company in 2016, is a medical device entrepreneur who was CEO and co-founder of Novocor Medical Systems before joining ACT. Previously he was an executive at Ethicon, Closure Medical and Abbott. Company CTO William Daunch, PhD, who the Community Blog also interviewed, met Tony at Closure Medical, and they both went on to senior leadership roles within J&J, following J&J's acquisition of Closure in 2005. Daunch also worked for AorTech on synthetic heart valves, and ran Allergan's surgical scaffold R&D and manufacturing site in Boston, before teaming up with Tony at ACT.

Both executives told the Community Blog recently that they are driven to work on something groundbreaking in oncology, that has a real chance to help people. “I lost my father to metastatic lung cancer and I am actually a kidney cancer survivor,” Daunch says. “I know first-hand how terrifying a cancer diagnosis can be, and the low survival rate in pancreatic cancer is heartbreaking. When we get tired, all we need to do is read a letter from a spouse or a child and their personal story of a loved one who is afflicted with pancreatic cancer or has recently passed away, and we quickly get our energy back to keep moving forward,” he continues.

ACT, primarily funded by an SBIR fast track grant (combined Phase 1 and Phase 2) as well as angel investment, is a finalist in the annual MedTech Innovator company-pitch competition. The company won the People’s Choice Award at a regional competition in April.

MRI-Safe Robot for Breast Biopsies
Breast cancer is the most common cancer in women worldwide. For women in the US, death rates from breast cancer are higher than those for any other cancer besides lung cancer. If suspicious tissue is found during screening, a patient is usually referred for a biopsy, which is usually done manually by advancing a needle through the breast toward the lesion. Accurate needle placement is essential; if the needle is placed in the wrong position, it is possible for a lesion to be found benign, when it may actually be malignant. In terms of locating lesions for biopsy, some of which may only be visible on MRI, precision robotics in combination with real-time MRI scans would be ideal. However, this level of quality has not been possible, as the scanner’s strong 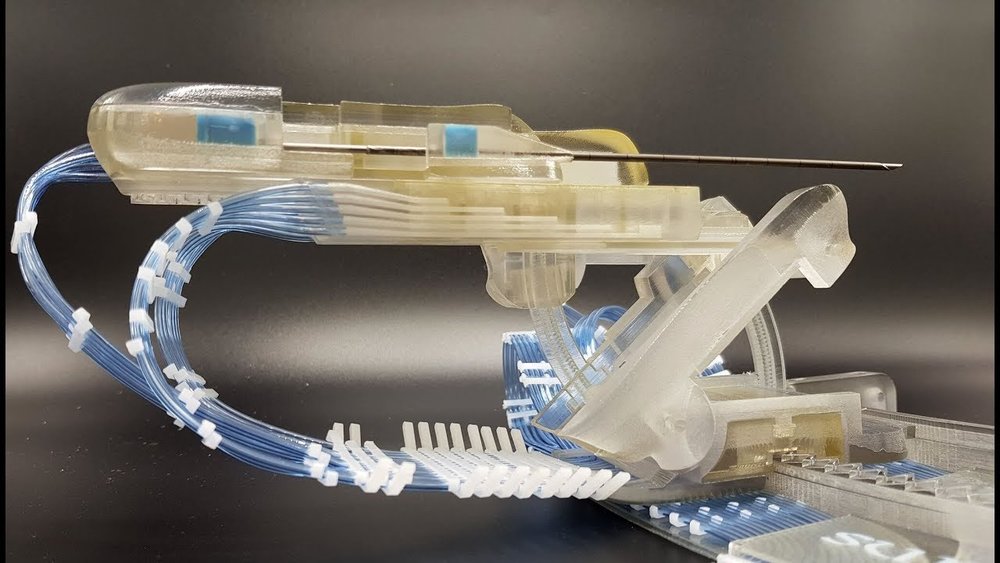 magnetic field means materials like metals cannot be used. A team at the University of Twente in The Netherlands has developed a novel, MRI-safe robotic system for breast biopsy, the Sunram 5, made entirely from plastic, that it hopes can address this huge and growing clinical need (pictured here).

Sunram 5 is being developed by Vincent Groenhuis, Dr. Françoise Siepel, Marcel Welleweerd, and Prof. Stefano Stramigioli of the Robotics and Mechatronics (RAM) lab at the University of Twente. Dr. Jeroen Veltman, radiologist at the Ziekenhuis Groep Twente (ZGT), also worked with the team in order to adapt the robot design to clinical practice as much as possible, and Abe van der Werf of Machnet B.V. helped develop the accompanying breast fixation system.

The Sunram 5 is driven by air pressure-powered cylinders. Thanks to the use of hoses to supply the air, the controls of the robot can be placed outside of the MRI scanner, according to the research team. The design of the robot has been fully adapted to the current MRI setting. For instance, the robot is compact, which means it can be attached to the system’s current breast compression system in various orientations. That way, the robot can easily reach any area in the breast.

Over the last few years, the University of Twente team has developed five iterations of its technology, and it has published a number of papers. “The last three iterations are active prototypes for demonstration in our lab and elsewhere,” Groenhuis told the Community Blog. “We plan to continue Sunram 5 development and perform MRI testing to quantitatively determine the targeting accuracy, publish in a scientific paper, and also investigate improvement points for the next-generation Sunram 6.”

Siepel told the Community Blog recently via e-mail that the current Sunram 5 design is fully compatible with the breast fixation system, and the combination of actuators with a large step size allow for accurate and high-speed movement in the lateral and needle insertion direction. The combination with small-step motors maintain the sub-millimeter accuracy. The biopsy gun and needle ejection safety system are another step forward in moving the system into eventual clinical practice.

When asked about her biggest inspiration for getting into this field, Siepel told the Community Blog, “The moments that impacted me the most were the ‘bad news conversations’ during clinical work, which is one of the hardest things to do. When you are facing the uncertainties of diagnosis, radiotherapy, and chemotherapy, then you understand in detail how important the breast cancer projects are that we are currently working on.”