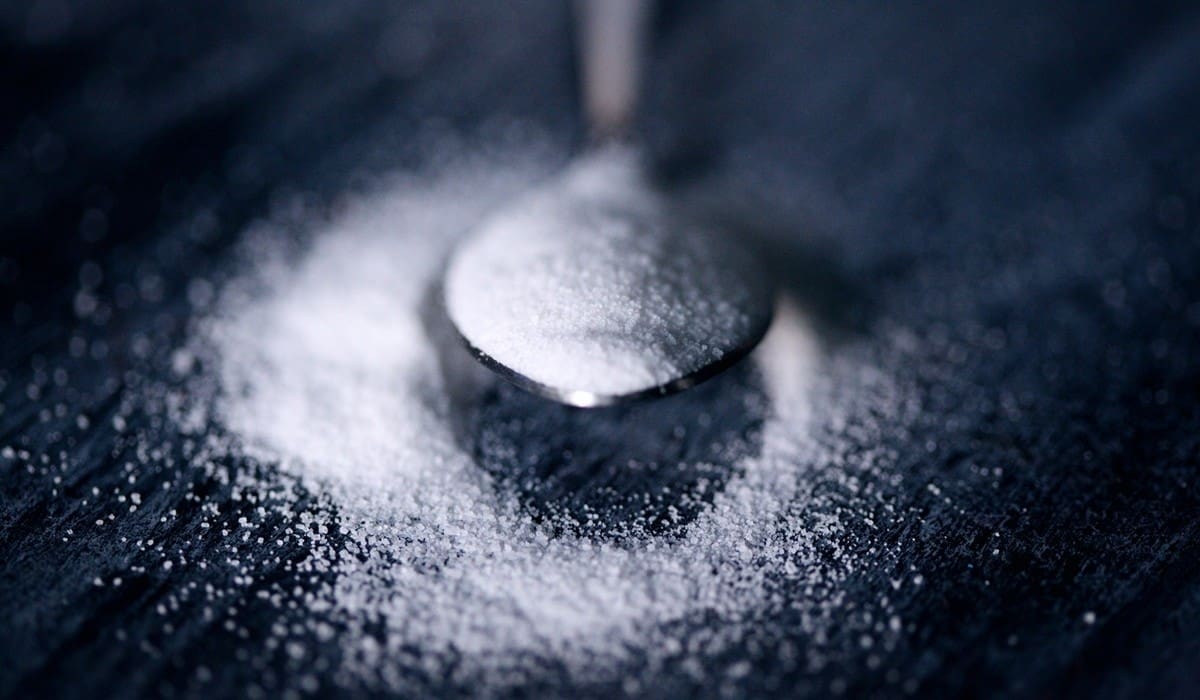 The JDRF, the largest private investor in type 1 diabetes, launched its own, unique, venture investment vehicle—the JDRF T1D Fund— in late 2016. The Fund, headquartered in Boston, aims to help accelerate the process of bringing impactful new treatments to patients with diabetes and move the field closer to a cure.

Heading-up this effort is Managing Director Katie Ellias, who joined the JDRF T1D Fund in July 2018. Ellias, who holds an MBA in Healthcare Management from the Wharton School at the University of Pennsylvania, began her VC career at Sofinnova Partners in Paris, under the wing of Antoine Papiernik, where she primarily focused on medical device investments. She also worked at Endeavor Vision in Geneva on growth-stage medtech and digital health investments. Previously, she held business development and sales and marketing roles at Medtronic plc, and was also involved in the initial stages of the MD Start incubator—a joint venture between Medtronic and Sofinnova, Sorin, and Versant Ventures at the time. 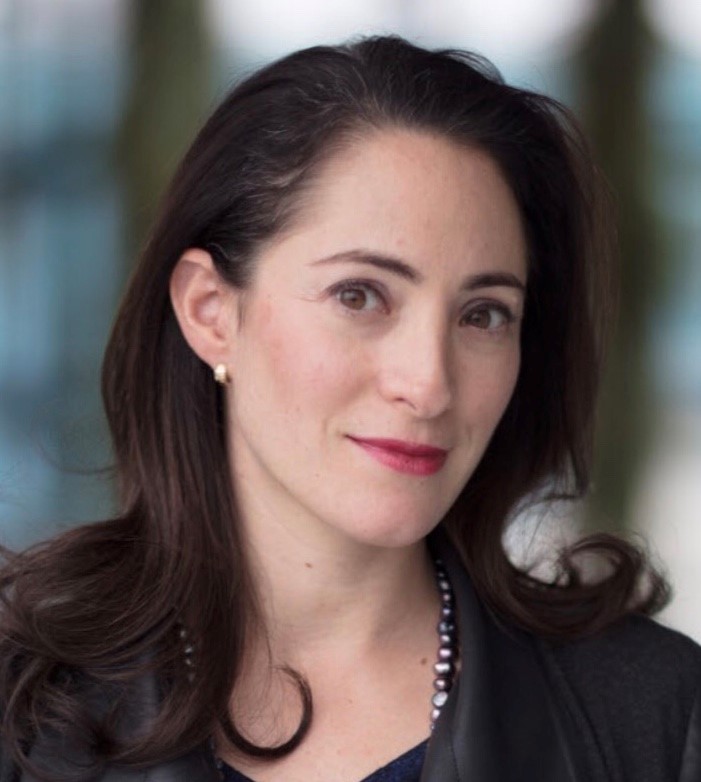 MedTech Strategist recently spoke with Ellias about the JDRF T1D Fund and the impact it could have on diabetes device innovation. Ellias notes that the Fund’s objective is to create a funding ecosystem for companies working on promising new technologies for T1D—a market that hasn’t always attracted the largest share of investor resources. “Our view is that there is an opportunity to spur investment in this space by combining specialized content knowledge and networking with the ability look at the landscape comprehensively.” The intention, she adds, is not to act alone, but to “act as a motivator for the rest of the venture community.”

The new Fund has been busy over the past two years, with 16 companies currently in its investment portfolio (13 have been publicly named to date—see Figure 1). And that includes some of the most interesting new names in diabetes device technology, such as Bigfoot Biomedical, GluSense Medical (developing an implantable glucose sensor), and Biolinq, which is developing a unique, CGM patch technology. 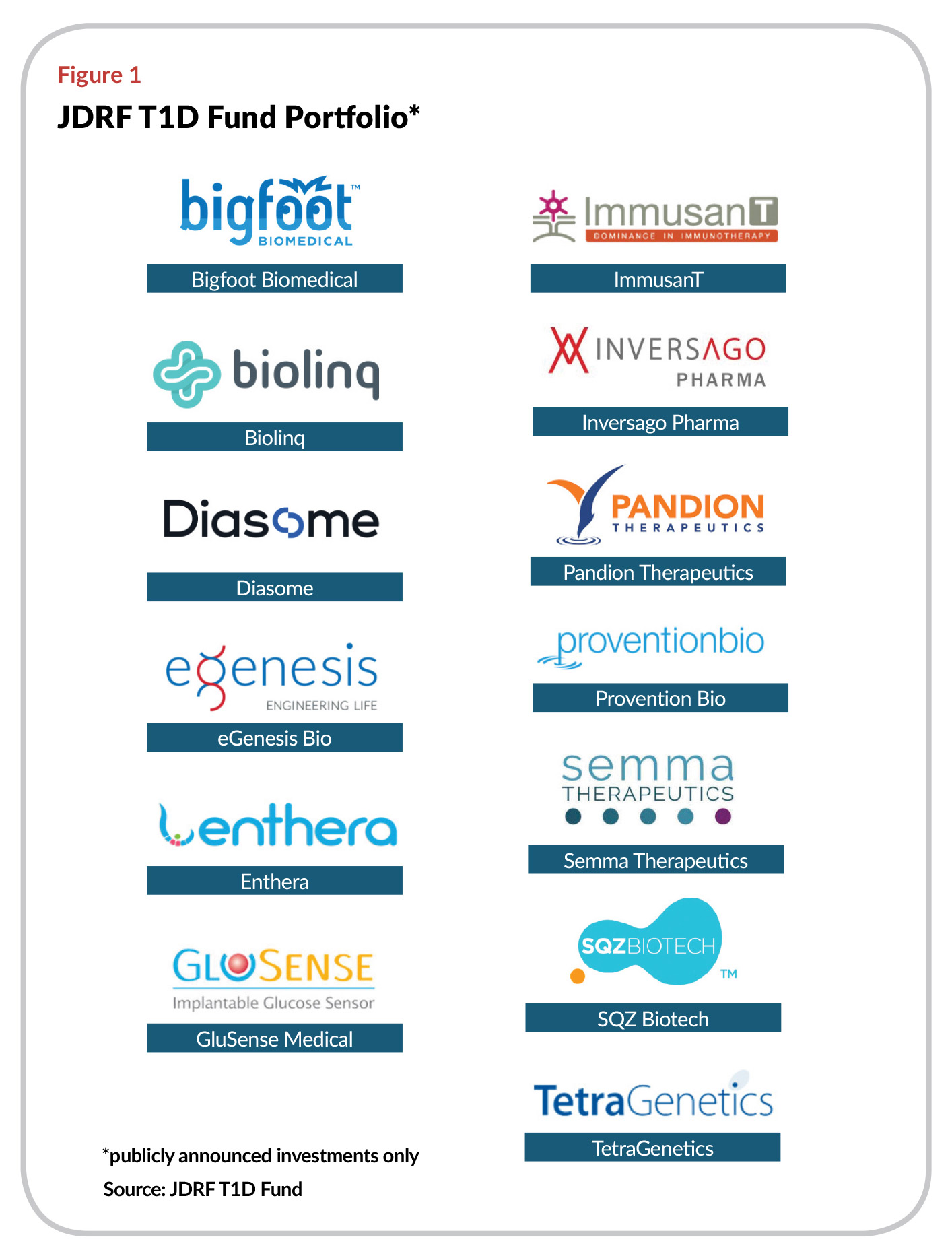 Part of the impetus for creating the Fund, says Ellias, was that there were unique opportunities to invest, through an equity structure, in projects that were already on the radar screen within the research grant-making group. That yielded a few well-vetted opportunities, allowing the team to make several investments in the first year. In two-and-a-half years, the team has now made 16 investments, as well as a couple of follow-ons in companies that have gone on to raise their next round of financing.

Ellias notes that historically there has been a lack of capital available for companies working in T1D because investors were wary of the difficulty and the time required for clinical trials. “Our view was that we had an opportunity to catalyze investment in the T1D space. Our model is not to do these deals alone, but to act as a motivator for the rest of the venture community, to create a platform to make investing into T1D-related assets attractive and help be there with a partner to validate the science,” she says.

The Fund’s initial intention may have been to fill the capital gap for T1D focused companies, but it is finding another clear investment archetype: to bring T1D indications to non-T1D companies, or to keep focus on T1D in multi-indication companies. Ellias acknowledges that it is easier to do that on the pharma side, because many device companies are single indication focused. One example is a company called SQZ Biotechnologies, which is principally targeting cancer immunology and has a partnership with Roche for its oncology approach. “The Fund motivated them to create an autoimmune program with T1D as the first indication in that franchise,” she says. “There's actually a lot of common biology around supercharging the immune system to fight cancer, and then using that same mechanism to do the opposite, to put it in reverse to essentially keep the immune system from destroying its own cells.”

As for investing in device companies, MedTech Strategist asked Ellias if the Fund particularly looks for companies that are pushing the envelope and thus might have more difficulty being funded by traditional VCs. “We look at these devices, but we also need to ensure a company is ultimately fundable by other investors too,” Ellias says.

The Fund aims to bring a “very high level of rigor and expertise” to the deals it evaluates. “Our involvement offers value, not only as a partner on the boards of these companies with management, but also often helps educate the syndicate and give confidence to investors who might otherwise be shy about getting into in the T1D space because they don’t know it well. And that’s most funds out there.”

“Ultimately,” she notes, “our goal is to support the launch of some truly game-changing therapies for the T1D community by getting them over the hump, onto or higher up the priority list, to generate clinical value for patients and economic value for the investors who are along for the ride.”

Read all from this author
Start-Ups

Existing clot aspiration catheters for ischemic stroke have relatively small distal openings, which means the clot must be broken up and removed in pieces. That increases the risk of leaving embolic material behind and the need for multiple catheter passes to completely clear the vessel. Anaconda Biomed is tackling this issue with a system featuring a distal tip that expands to accommodate the full vessel diameter, thus enabling removal of the entire clot in a single piece.

The Shift to Digital Primary Care: What Medtech Needs to Know