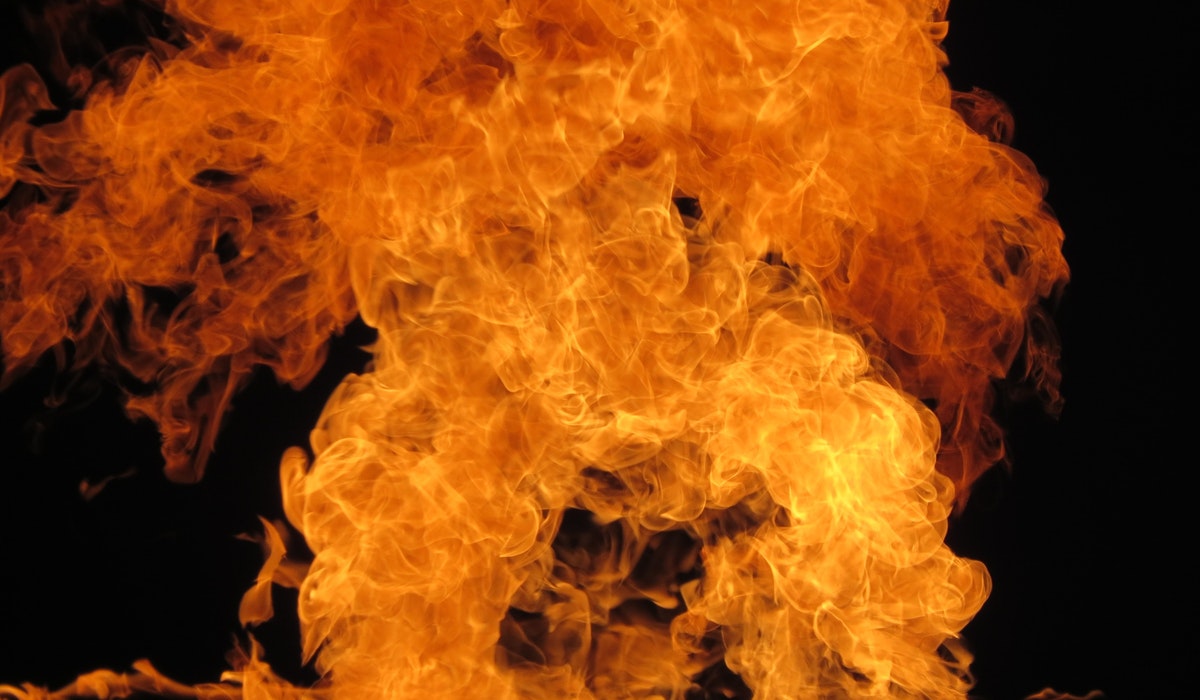 There have been countless business failures in the interventional GERD market. How has EndoGastric Solutions managed to succeed?

Gastroesophageal reflux disease is a condition in which fluids from the stomach reflux into the esophagus and expose it to stomach acid. It’s a mechanical disorder, caused by a failure of the lower esophageal valve, and the problem might be due to the valve itself, to alterations in the lower esophageal muscle just below it, or to a hiatal hernia, a condition where part of the stomach bulges into the chest through a natural defect in the diaphragm. 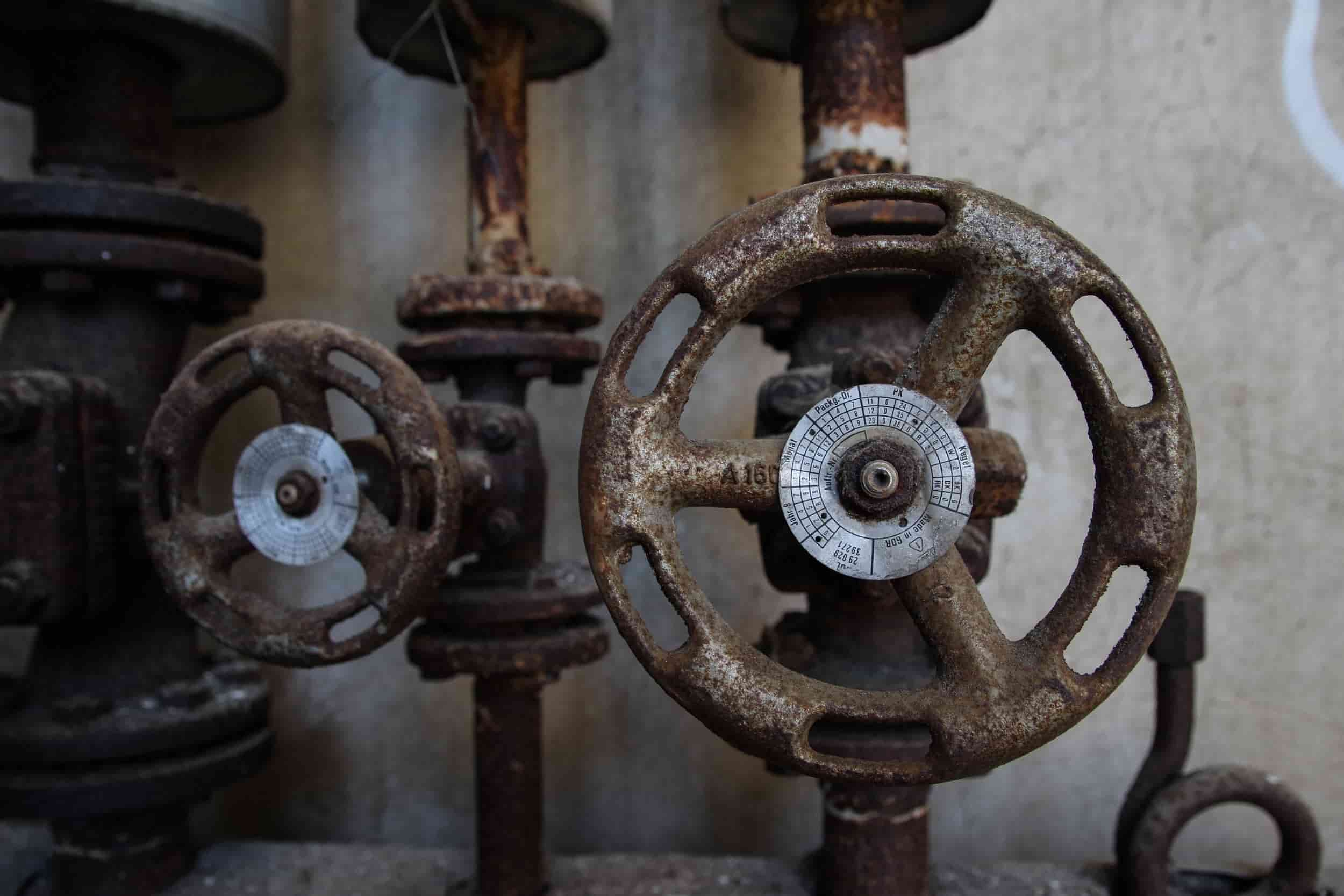 Patients with GERD experience heartburn, chest pain, regurgitation, trouble sleeping, and many other symptoms. The first course of action, diet and lifestyle changes, is challenging to manage; patients must avoid certain foods and time their meals so they are several hours before bedtime. However, it is medically important to control the symptoms of GERD because it is not a benign condition. When the esophagus is chronically exposed to stomach acid, tissue changes occur and a condition called Barrett’s esophagus results. Barrett’s is a precursor to cancer, and patients who develop the condition must be regularly monitored.

It’s also economically important to get GERD patients under control because this disease can be expensive to manage. According to one US-based study about the cost of employees with GERD, because of physician visits, lab work, drug costs, and other direct and indirect costs, people with GERD cost $3,355 more per year than people without GERD.

When diet and lifestyle modifications fail to control the disease, physicians prescribe proton pump inhibitors, which work by neutralizing stomach acid. They don’t actually stop the reflux, which is due to an anatomical failure of the antireflux barrier. For that reason, and because they don’t control symptoms for 30-40% of the people that take them every day, PPIs are only a partial solution.

For patients with severe GERD who don’t respond to PPIs, there is a surgical solution, the Nissen fundoplication, which is performed laparoscopically. The goal of the surgery is to create a new, tighter valve by wrapping a portion of the upper stomach (the fundus) around the lower esophagus. This procedure is highly effective at preventing reflux in the majority of patients. However, there are now only about 30,000 such procedures each year (significantly fewer than previous years). Patients don’t opt for Nissen fundoplication for several reasons; first, because it’s surgery. It involves perhaps two nights in the hospital and a 7-10 day recovery period. But most impactful on the decision-making process is the new-onset of side effects that typically follow the procedure: discomfort when swallowing (dysphagia), an inability to belch, and increased gas bloat and flatulence. This leaves a treatment gap for patients who aren’t responding well to PPIs and who aren’t eligible or don’t want the Nissen fundoplication surgery (see Figure 1). 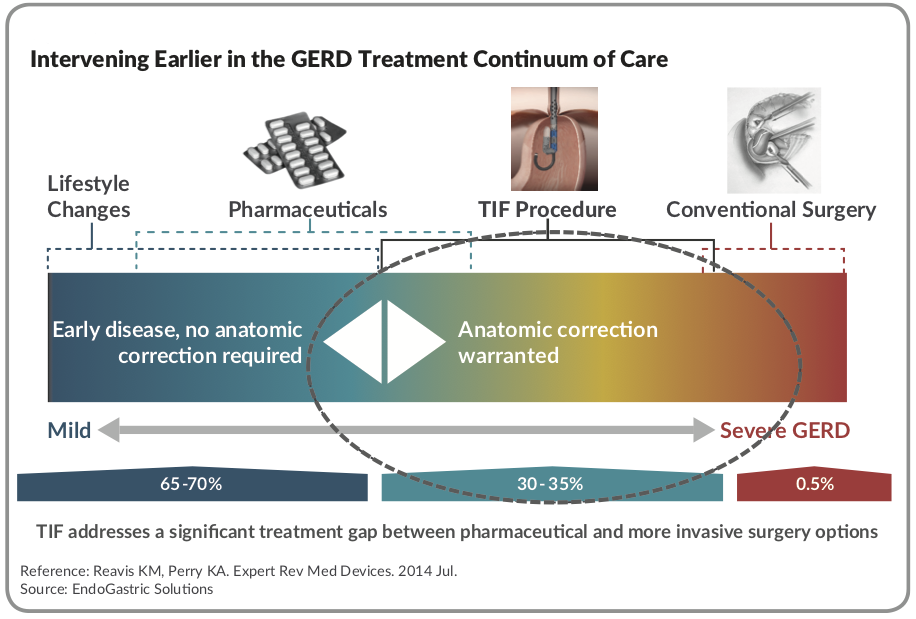 To address this ever widening gap, EndoGastric Solutions Inc. created an incisionless approach for rebuilding a physiologic lower esophageal sphincter. The TIF 2.0 procedure results in a partial fundoplication that measures 270 degrees in circumference, and 3 cm in length. During the TIF 2.0 procedure, a patient is placed under anesthesia. An endoscope is inserted into the EsophyX Z+ device, the device and endoscope enter through the patient’s mouth and are advanced into the stomach. The stomach is inflated and the endoscope is retroflexed to provide direct visualization of the esophageal junction.

While lengthening the esophagus, the EsophyX Z+ device retracts a fold of tissue into the device using suction, the tissue is folded up and around the distal esophagus, and suction is applied to reduce a small hiatal hernia. A trigger handle embeds a pair of nonabsorbable polypropylene H fasteners (called SerosaFuse fasteners) above the gastro-esophageal junction to oppose the fundus to the esophagus. This process is repeated in specific locations—approximately 20 SerosaFuse fasteners are used—to create a new valve.

More than a hundred studies have been published that consistently demonstrate that TIF 2.0 works, according to EGS’ CEO Skip Baldino, and the company sponsored three randomized clinical trials generating level 1b data (two in the US and one in Europe). Five-year results of the TEMPO (TIF 2.0 vs Medical Proton Pump Inhibitor Management of Refractory Gastroesophageal Reflux Disease Symptoms) were pub­lished in February 2018. The study randomized 63 patients to either treatment with the TIF 2.0 procedure, or PPI therapy.

The results were overwhelmingly positive. At five years post-procedure, 86% of patients reported the elimination of regurgitation and 80% of patients reported the elimina­tion of all atypical symptoms. There was a low reoperation rate (5%). The report also included an economic analysis finding that at two years, total healthcare costs were sub­stantially less in patients treated with TIF 2.0 ($66,000) as compared to patients who undergo laparoscopic Nissen fundoplication ($124,000).

Investors are on board too. EndoGastric Solutions recently closed a $45 million financing round from a group of medical device VCs. That money will boost the company’s marketing and commercialization efforts.

The Minimally Invasive Revolution in GI Endoscopy: An Interview with Kenneth Chang

What’s Next for the GERD Device Market? A Conversation with Skip Baldino of EndoGastric Solutions

The GERD Device Market: At the Crossroads

One of the highlights of this year’s NANS meeting was Nevro’s presentation on results from its RCT for painful diabetic neuropathy.

With Point-of-Care MRI, Synaptive Measures What Matters in Stroke