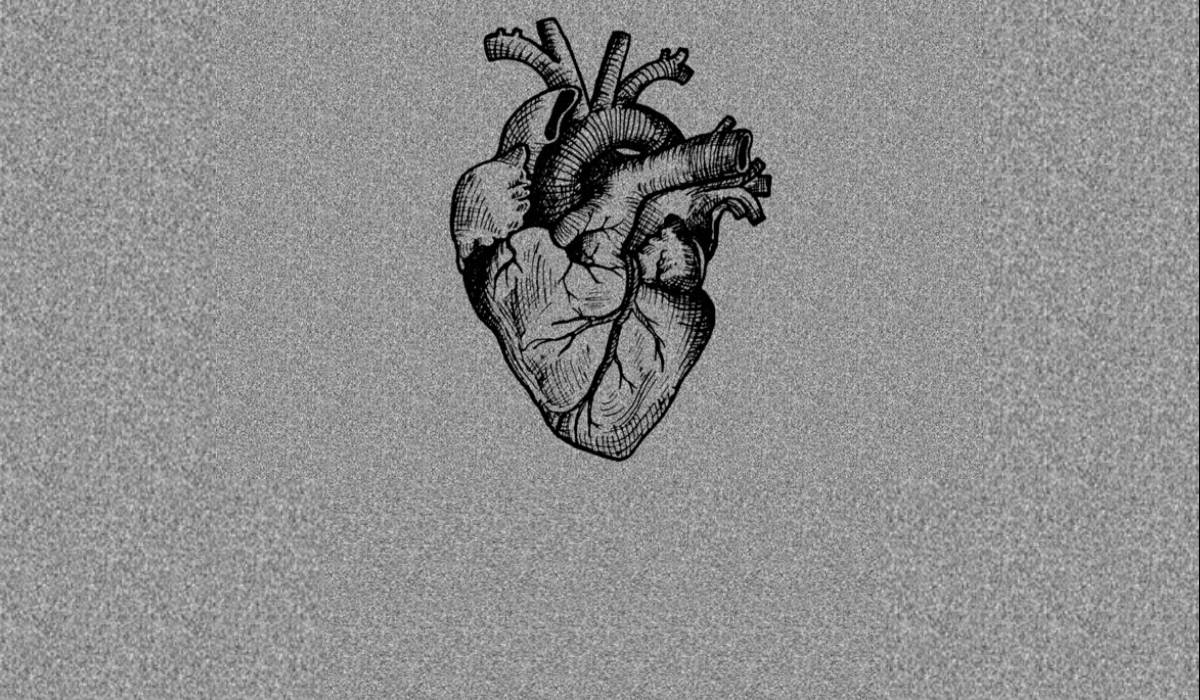 PAH, a progressive, incurable disease leading to right heart failure that strikes mostly women in the prime of life, has limited treatment options beyond some of the most expensive drugs covered by Medicare. TCT 2018 Shark Tank winner Aria CV hopes to impact the poor prognosis for this disease by focusing its first-of-a-kind, fully implantable device on a fundamental new mechanism of action—mimicking the function of a healthy pulmonary artery.

In 1997, the same year that General Electric was ranked the world’s largest public corporation by market cap (Apple Inc. now has that honor), and NASA’s Mars Pathfinder was the first rover to land on the Red Planet, another notable event occurred that propelled a little-known medical condition into the spotlight. In August of that year, an article in the New England Journal of Medicine by Heidi Connelly, MD of the Mayo Clinic revealed her experience in treating 24 otherwise healthy women with primary pulmonary hypertension and heart valve abnormalities who had been taking the 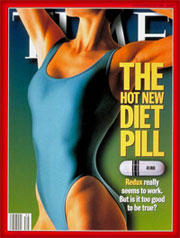 popular and powerful diet drug, Fen-Phen (a combination of fenfluramine and dexfenfluramine). Following these findings and additional cases of heart abnormalities and deaths reported to the FDA in 1997, this and other diet drugs including Redux were abruptly removed from the market. Billions of dollars in settlements have since been paid to more than 500,000 patients by American Home Products Corp. (name changed in 2002 to Wyeth), the distributor of Fen-Phen.

This unfortunate scandal helped to bring attention to the rare and serious disease pulmonary hypertension (PH), a condition impacting about 1% of the world population, or about 76 million people. PH is classified into five main groups (1-5) by the World Health Organization, with most treatments directed toward patients with group 1 pulmonary arterial hypertension (PAH). Approximately 500-1,000 new cases of PAH are diagnosed each year in the US, with a similar incidence in Europe, according to the National Organization for Rare Disorders.

A deadly, progressive, incurable disease, PAH is characterized by high blood pressure in the arteries that carry blood from the right side of the heart through the lungs. Stiffening and narrowing in the blood vessels in the lungs makes the right side of the heart work harder, eventually leading to right heart failure. The classic idiopathic form of the disease affects mostly young women between the ages of 30 and 60. It leads to a very poor quality of life, with an average survival time of approximately six or seven years. Potential other causes of the disease include drug use (such as methamphetamines), HIV infection, cirrhosis of the liver, congenital heart abnormalities, and connective tissue/autoimmune disorders such as scleroderma, rheumatoid arthritis, and lupus.

PAH represents a huge economic burden. Patients are very debilitated, and typically treated by multiple drugs that each can cost more than $100,000 per year—making them among the most expensive drugs covered by Medicare. However, they are generally considered to have limited efficacy. In addition to the 11 drugs that are FDA-approved for this indication, there are multiple drugs under development and in clinical trials. 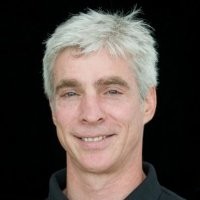 “PAH is a profound unmet medical need, despite a $5 billion drug market and tremendous interest by the pharmaceutical industry,” says John Scandurra, DVM, co-founder and CEO of Aria CV Inc., in an interview with the Community Blog. Aria CV, founded in 2010 and based in St. Paul, MN, is developing a first-of-its-kind, fully implantable device that it hopes will be able to impact the poor prognosis for this disease, improve quality of life, and save healthcare costs. The company’s technology is focused on a fundamental new mechanism of action, by mimicking the function of a normal healthy pulmonary artery and thus hopefully impacting progressive right heart failure, says Scandurra.

In 2009, Scandurra and Karl Vollmers, PhD were introduced to PAH while working with Marc Pritzker, MD, who runs the Pulmonary Hypertension Clinic at the University of Minnesota Hospital. They learned that the deadly disease represented a tremendous unmet medical need that was relatively unknown at the time—and definitely not on the radar in the medical device space. The two were inspired by the passion and encouragement of Dr. Pritzker, as well as American Heart Association Distinguished Scientist, Kenneth Weir, MD, who is now the chief of Aria CV’s scientific advisory board. Another key influencer for the Aria CV team is Norman Dann, a personal mentor for Scandurra who served as a senior VP at Medtronic, advisory board member at the Earl Bakken Medical Devices Center, and is now an Aria CV advisor. Based on the input and encouragement from these thought leaders, Scandurra and Vollmers started developing a novel, device-based concept to treat PAH. The following year, they licensed the original patents from the university, and founded Aria CV.

Aria CV’s device is designed to compensate for the increased stiffness of the normally very elastic pulmonary vessels, which occurs early on in PAH due to elastin breakdown and collagen deposition. The implantable device consists of a balloon in the main pulmonary artery held in place by an anchor.  The balloon is connected to a reservoir by a narrow conduit. The balloon inflates and deflates in coordination with the heart cycle, mimicking healthy vessel compliance and allowing more normal blood flow. The technology, which is completely passive and has no power supply or electronics, is designed to at least partially ease the burden on the heart, providing symptom relief and hopefully impacting patient survival. There is no device on the market addressing this aspect of the disease, says Scandurra. 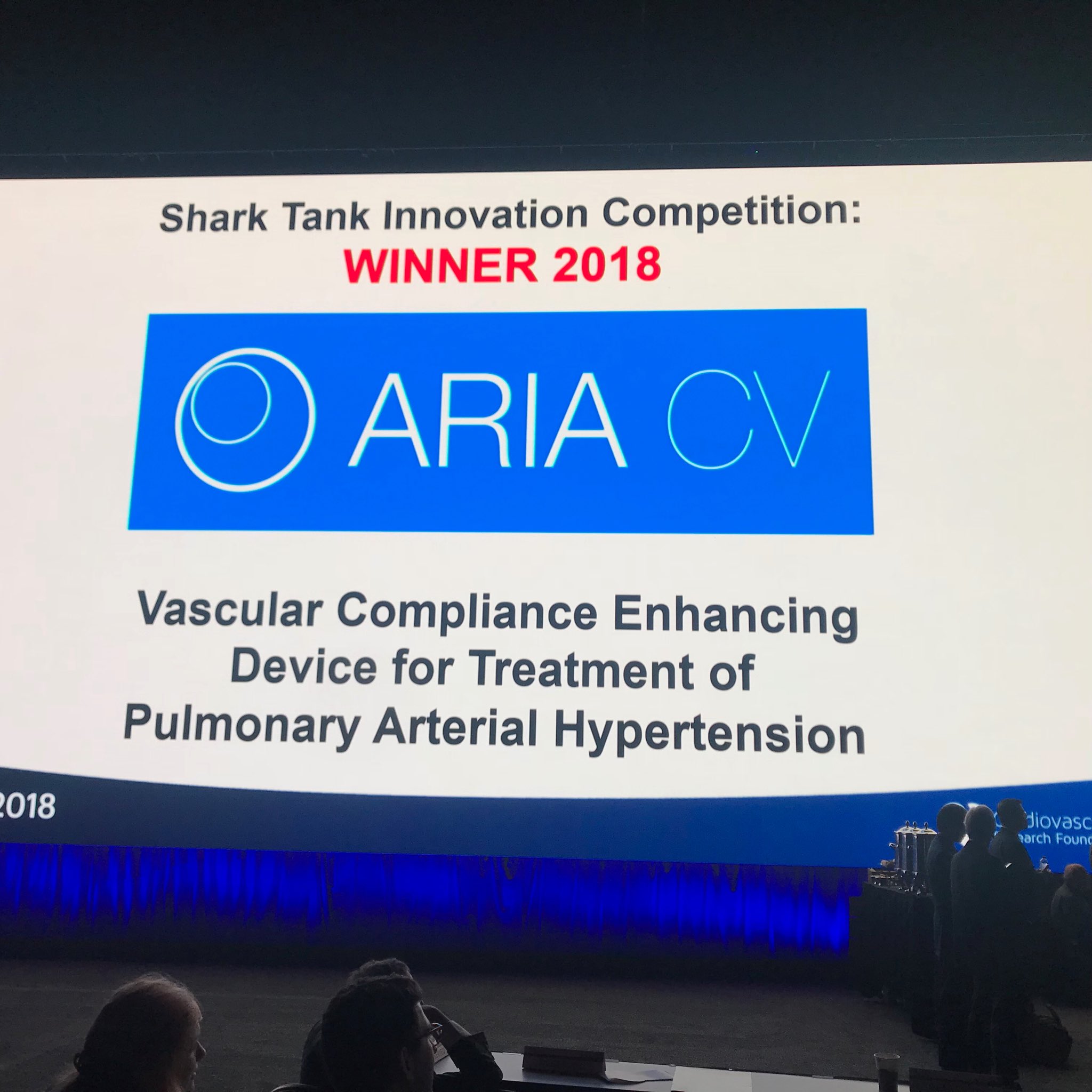 This September, Aria CV took home the top prize at the Transcatheter Cardiovascular Therapeutics (TCT) 2018 Shark Tank Competition, a contest—now in its fifth year—created to highlight the most innovative devices and technologies in the field of cardiovascular medicine. It was selected out of an initial pool of 30+ applicants, of which seven were chosen to present their concept to a panel of top multidisciplinary medical device and investment executives. Applicants were judged on the following criteria: unmet clinical need, out-of-the-box concept, IP position/viability, biological proof-of-concept, regulatory pathway, and commercialization potential. For the first time this year, the winning team also received the $200,000 Jon DeHaan Foundation Award for Interventional Innovation. According to Juan F. Granada, MD, President and CEO of Cardiovascular Research Foundation (the nonprofit research and educational organization responsible for TCT), in a press release announcing Aria CV’s win, “It’s a truly novel concept with potential to improve the survival and quality of life for people with heart disease.”

At TCT, the company reported successful results of its first-in-human, 10-patient safety and efficacy study, led by leading PH physician and interventional cardiologist, Irene Lang, MD. Results of the prospective, single-center, non-randomized, single-arm study, that took place at the Medical University of Vienna, showed that while the device was temporarily implanted and activated in patients (six male and four female, most in their early 50s and all in heart failure Class III), there were no adverse events reported, a 24% mean change in exercising cardiac output, and a 26% mean stroke volume index improvement. “We saw a very significant enhancement of cardiac output in these patients, with a 1.8 liters per minute change under exercise,” says Scandurra. “These results suggest the device has the potential to improve exercise capacity and quality of life for these patients.”

The company envisions its device as a long-term implant, and is planning a clinical trial with enrollment beginning in 2019. It plans to utilize a strategy for building clinical evidence, starting with no-option patients and expanding to larger, lower-risk patient populations. The company ultimately hopes to be a key component of a comprehensive solution for patients suffering from devastating PAH. While this post focuses on PAH, Scandurra said the device may be equally efficacious in highly prevalent forms of the disease such as pulmonary hypertension due to lung disease and left heart failure.

Aria CV has raised $19 million in funding through Series A and B rounds. Its Series A financing was led by Catalyst Health Ventures and included Broadview Ventures, BioStar Ventures, Cedar Point Capital, and a strategic investor.

Corvia Medical: Finally, an Intervention for the Other Half of Heart Failure